"Never be in a hurry; do everything quietly and in a calm spirit. Do not lose your inner peace for anything whatsoever, even if your whole world seems upset." Saint Francis De Sales

It's been a few months since my last entry. Figured it was time to write again.

Life is good and we are all healthy.

I'm working on painting some barrels for my village of Briartun, New York. Once I'm finished with the barrels, I'll add some boxes and mount them. Photos will be taken and posted here.

The weather here in Moseley is not too bad. 51 degrees and some drizzle. We won't be able to enjoy the sun until Friday. But it is winter and I'n thankful we have no snow.

Posted by Paul Forgette at 11:11 AM No comments:

End of the Weekend - A Short Story 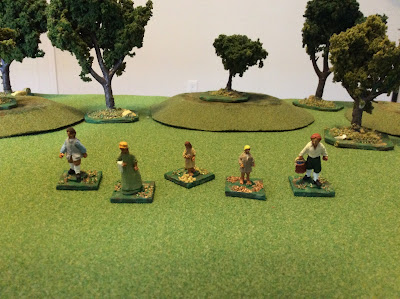 The children are standing near some woods east of the village of Briatun.

On the left are Matthew and Abigail Longton. The son and daughter of the Reverend Thomas and Mary Longton.

The young girl in the center is Mary Gantt, daughter of Nancy and Issac Gantt.

Kenneth Bates, the lad next to Mary, is the brother of Donald Bates.

Daniel Bell is the son of Martha and Ira Bell.

Posted by Paul Forgette at 2:29 PM No comments: